The Sons Of Anarchy have left town… 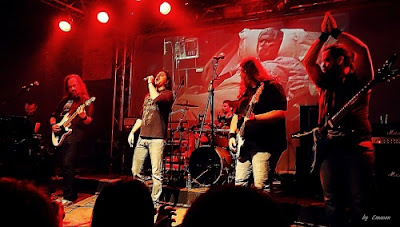 The Sons Of Anarchy have left town: ILLUSORY thoughts & thanx

It was last summer when Dimitris Barbas from Galliard Syndrome told us about this whirlwind. Soon we started to receive info about the series and the festival. It totally hit us… The bands, the guests, the promotion,
the works!

Being part of SAMCRO made us understand, comprehend and breathe certain songs we used to like a lot; It was a different perspective, a brand new orientation, a road to freedom and music inspiration. Whilst rehearsing we tried to get into the role. Walking the path of powerful bikes, we managed to Rock’N’Ride for just a bit…

The night of the festival was simply and purely magical. A completely sold-out venue, hundreds of people liking every moment of music, enjoying themselves and singing along. The ideal audience! When you are performing in front of a frantic crowd, you can’t help but rule the stage. That’s what the bands did, that’s what the spectators viewed.

The Riders are gone now… The stage is empty and the hearts and souls are full. It’s time to start writing, it’s the beginning of things to come
to an end.

Our most sincere and Ivoried thanks to Rocking.gr for running the whole thing the way they did. Ilias Kouroudis and Dimitris Barbas accomplished the impossible and they loved every minute of it! The mighty soundmen of the Kyttaro Live Club, Antonis and George, the killer team that supported the entire event, naturally the bands, 4Bitten, Bad Moon Rising, Black Lioness, Drunken Gramophone, Galliard Syndrome, Mr. Highway Band, Restless Ocean, Sober On Tuxedos, Soundtruck & Voice Box, the guests, Dionisis Kladis, Stelios Teselecta Pavlou, Tony Venieris, Antonis Vlachos… Going to our own now, the ILLUSORY Vocal Gang, Elena Theodorou, Minas Notaras, Jenny Kaldani and Georgia Apalodima. Last but not least, the youngster that made us go overenthusiastic with his unbelievable attitude. Our good friend Dimitris brought his son Yiannis to the show and the nine-year old Metalhead surprised us all with his manners and his love for music. Not only did he embrace us and told us how much he loves what we do, he got on stage during our show and stood there, singing “Pale Moonlight”, knowing the lyrics by heart! A whole bunch of people told us they were watching the little boy “performing” and they simply adore him. It was the best way to wrap it up… Till the next one!

I think we are going to stick around… We want more, can you blame us? Up on the stage is fine!

“Polysyllabic” album is on its way… Many more Live shows to come, many more ways and ways to say Shine On! Thank you! 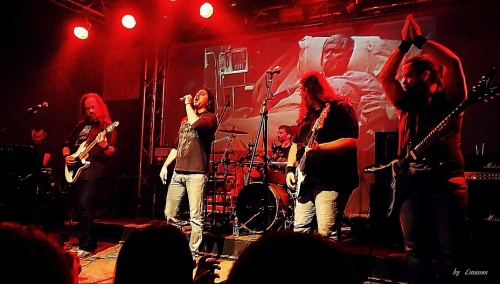