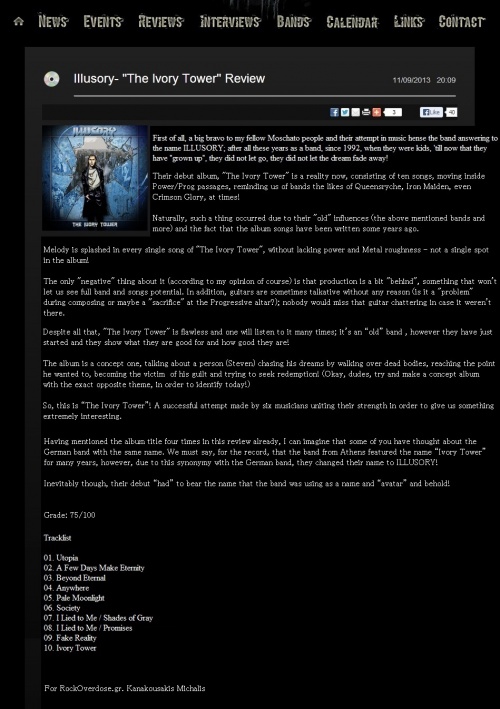 This is the review for “The Ivory Tower” from the Rock Overdose webzine translated in English!
Grade 75/100

First of all, a big bravo to my fellow Moschato people and their attempt in music hence the band answering to the name ILLUSORY; after all these years as a band, since 1992, when they were kids, ’till now that they have “grown up”, they did not let go, they did not let the dream fade away!

Their debut album, “The Ivory Tower” is a reality now, consisting of ten songs, moving inside Power/Prog passages, reminding us of bands the likes of Queensryche, Iron Maiden, even Crimson Glory, at times!

Naturally, such a thing occurred due to their “old” influences (the above mentioned bands and more) and the fact that the album songs have been written some years ago.
Melody is splashed in every single song of “The Ivory Tower”, without lacking power and Metal roughness – not a single spot in the album!

The only “negative” thing about it (according to my opinion of course) is that production is a bit “behind”, something that won’t let us see full band and songs potential. In addition, guitars are sometimes talkative without any reason (is it a “problem” during composing or maybe a “sacrifice” at the Progressive altar?); nobody would miss that guitar chattering in case it weren’t there.

Despite all that, “The Ivory Tower” is flawless and one will listen to it many times; it’s an “old” band , however they have just started and they show what they are good for and how good they are!

The album is a concept one, talking about a person (Steven) chasing his dreams by walking over dead bodies, reaching the point he wanted to, becoming the victim of his guilt and trying to seek redemption! (Okay, dudes, try and make a concept album with the exact opposite theme, in order to identify today!)

So, this is “The Ivory Tower”! A successful attempt made by six musicians uniting their strength in order to give us something extremely interesting.

Having mentioned the album title four times in this review already, I can imagine that some of you have thought about the German band with the same name. We must say, for the record, that the band from Athens featured the name “Ivory Tower” for many years, however, due to this synonymy with the German band, they changed their name to ILLUSORY!

Inevitably though, their debut “had” to bear the name that the band was using as a name and “avatar” and behold!