Press Overview and a Single is Out! 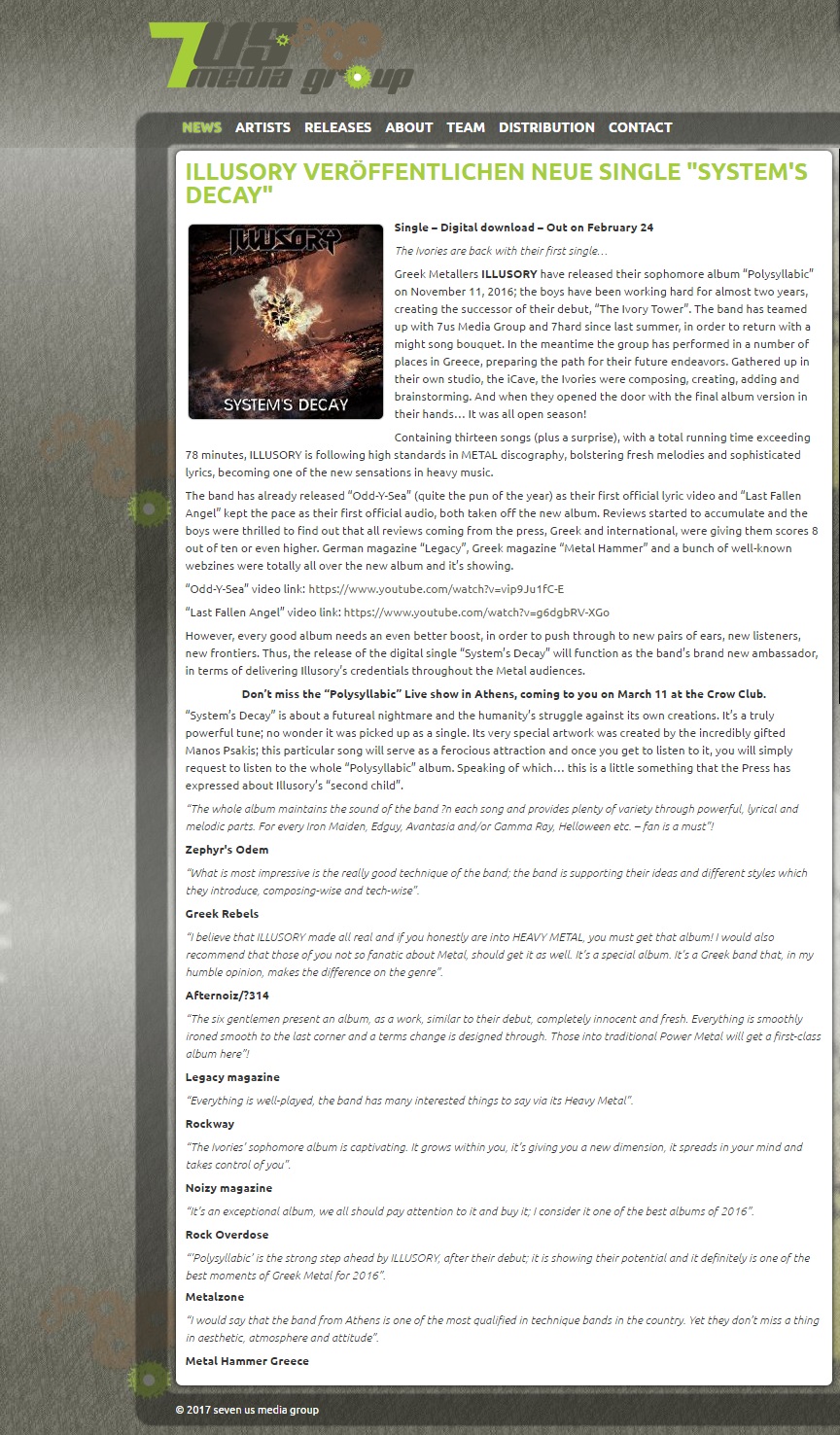 The Ivories are back with their first single…

Greek Metallers ILLUSORY have released their sophomore album “Polysyllabic” on November 11, 2016; the boys have been working hard for almost two years, creating the successor of their debut, “The Ivory Tower“. The band has teamed up with 7us Media Group and 7hard since last summer, in order to return with a might song bouquet. In the meantime the group has performed in a number of places in Greece, preparing the path for their future endeavors. Gathered up in their own studio, the iCave, the Ivories were composing, creating, adding and brainstorming. And when they opened the door with the final album version in their hands… It was all open season!

Containing thirteen songs (plus a surprise), with a total running time exceeding 78 minutes, ILLUSORY is following high standards in METAL discography, bolstering fresh melodies and sophisticated lyrics, becoming one of the new sensations in heavy music.

The band has already released “Odd-Y-Sea” (quite the pun of the year) as their first Official Lyric Video and “Last Fallen Angel” kept the pace as their first Official Audio, both taken off the new album. Reviews started to accumulate and the boys were thrilled to find out that all reviews coming from the press, Greek and international, were giving them scores 8 out of ten or even higher. German magazine “Legacy“, Greek magazine “Metal Hammer” and a bunch of well-known webzines were totally all over the new album and it’s showing.

However, every good album needs an even better boost, in order to push through to new pairs of ears, new listeners, new frontiers. Thus, the release of the digital single “System’s Decay” will function as the band’s brand new ambassador, in terms of delivering ILLUSORY’s credentials throughout the Metal audiences.

Don’t miss the “Polysyllabic” Live show in Athens, coming to you on March 11 at the Crow Club.

“System’s Decay” is about a futureal nightmare and the humanity’s struggle against its own creations. It’s a truly powerful tune; no wonder it was picked up as a single. Its very special artwork was created by the incredibly gifted Manos Psakis; this particular song will serve as a ferocious attraction and once you get to listen to it, you will simply request to listen to the whole “Polysyllabic” album. Speaking of which… this is a little something that the Press has expressed about ILLUSORY’s “second child”.

“The whole album maintains the sound of the band in each song and provides plenty of variety through powerful, lyrical and melodic parts. For every Iron Maiden, Edguy, Avantasia and/or Gamma Ray, Helloween etc. – fan is a must”!
Zephyr’s Odem

“What is most impressive is the really good technique of the band; the band is supporting their ideas and different styles which they introduce, composing-wise and tech-wise”.
Greek Rebels

“I believe that ILLUSORY made all real and if you honestly are into HEAVY METAL, you must get that album! I would also recommend that those of you not so fanatic about Metal, should get it as well. It’s a special album. It’s a Greek band that, in my humble opinion, makes the difference on the genre”.
Afternoiz / Π314

“The six gentlemen present an album, as a work, similar to their debut, completely innocent and fresh. Everything is smoothly ironed smooth to the last corner and a terms change is designed through. Those into traditional Power Metal will get a first-class album here”!
Legacy Μagazine

“Everything is well-played, the band has many interested things to say via its Heavy Metal”.
Rockway

“The Ivories’ sophomore album is captivating. It grows within you, it’s giving you a new dimension, it spreads in your mind and takes control of you”.
Noizy Μagazine

“It’s an exceptional album, we all should pay attention to it and buy it; I consider it one of the best albums of 2016”.
Rock Overdose

“Polysyllabic is the strong step ahead by ILLUSORY, after their debut; it is showing their potential and it definitely is one of the best moments of Greek Metal for 2016”.
Metalzone

“I would say that the band from Athens is one of the most qualified in technique bands in the country. Yet they don’t miss a thing in aesthetic, atmosphere and attitude”.
Metal Hammer Greece