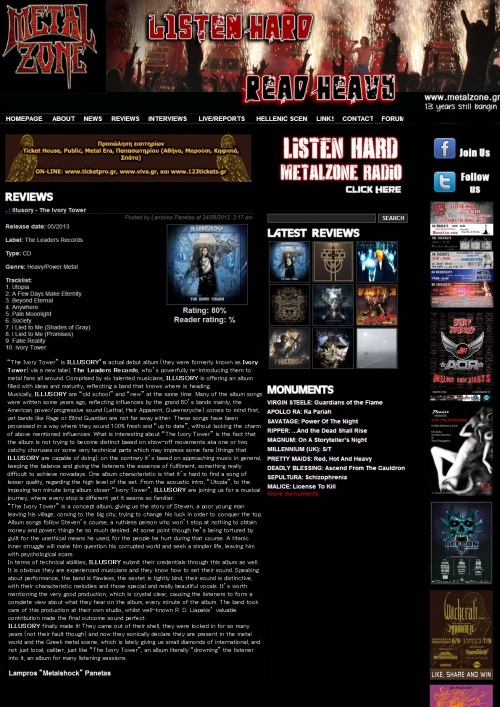 This is the review for “The Ivory Tower” from the Metal Zone webzine translated in English!
80% rating!

“The Ivory Tower” is ILLUSORY’s actual debut album (they were formerly known as Ivory Tower) via a new label, The Leaders Records, who’s powerfully re-introducing them to metal fans all around. Comprised by six talented musicians, ILLUSORY is offering an album filled with ideas and maturity, reflecting a band that knows where is heading. Musically, ILLUSORY are “old school” and “new” at the same time. Many of the album songs were written some years ago, reflecting influences by the grand 80’s bands mainly; the American power/progressive sound (Lethal, Heir Apparent, Queensryche) comes to mind first, yet bands like Rage or Blind Guardian are not far away either. These songs have been processed in a way where they sound 100% fresh and “up to date”, without lacking the charm of above mentioned influences. What is interesting about “The Ivory Tower” is the fact that the album is not trying to become distinct based on show-off movements aka one or two catchy choruses or some very technical parts which may impress some fans (things that ILLUSORY are capable of doing); on the contrary it’s based on approaching music in general, keeping the balance and giving the listeners the essence of fulfilment, something really difficult to achieve nowadays. One album characteristic is that it’s hard to find a song of lesser quality, regarding the high level of the set. From the acoustic intro, “Utopia”, to the imposing ten minute long album closer “Ivory Tower”, ILLUSORY are joining us for a musical journey, where every stop is different yet it seems so familiar. “The Ivory Tower” is a concept album, giving us the story of Steven, a poor young man leaving his village, coming to the big city, trying to change his luck in order to conquer the top. Album songs follow Steven’s course, a ruthless person who won’t stop at nothing to obtain money and power; things he so much desired. At some point though he’s being tortured by guilt for the unethical means he used, for the people he hurt during that course. A titanic inner struggle will make him question his corrupted world and seek a simpler life, leaving him with psychological scars. In terms of technical abilities, ILLUSORY submit their credentials through this album as well. It is obvious they are experienced musicians and they know how to set their sound. Speaking about performance, the band is flawless, the sextet is tightly bind, their sound is distinctive, with their characteristic melodies and those special and really beautiful vocals. It’s worth mentioning the very good production, which is crystal clear, causing the listeners to form a complete view about what they hear on the album, every minute of the album. The band took care of this production at their own studio, whilst well-known R. D. Liapakis’ valuable contribution made the final outcome sound perfect.
ILLUSORY finally made it! They came out of their shell, they were locked in for so many years (not their fault though) and now they sonically declare they are present in the metal world and the Greek metal scene, which is lately giving us small diamonds of international, and not just local, caliber, just like “The Ivory Tower”, an album literally “drowning” the listener into it, an album for many listening sessions.