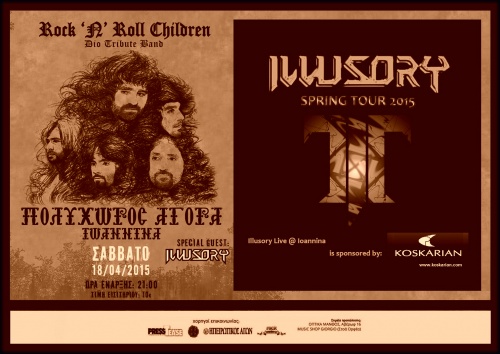 ILLUSORY from Athens-Greece is the band that the mighty Rock ‘N’ Roll Children – maybe the best Dio tribute band in the world today – have chosen to share the stage with in Ioannina-Greece.

ILLUSORY played their latest gig on March 22 at the Kyttaro Live, in Athens, and it was a complete success. Now it’s time for a series of live appearances, both in Athens and outside the capital city and Ioannina is one of the cities about to experience their musical proposal.

ILLUSORY have released their debut, “The Ivory Tower”, in May 2013. Formerly known as The Ivory Tower, the boys changed their band-name and became active in the record making business by presenting their songs in Greece and abroad. The album was also released in Japan in August 2013, featuring a slightly altered cover art and the infamous ΟΒΙ. ILLUSORY are about to complete their sophomore album recordings and their second attack is expected sometime this year!
As the official guests in this fabulous Rock ‘N’ Roll Children event, ILLUSORY state they are thrilled and emotionally touched, yet ready to “invade” the historical city of Ioannina and the stage of “Polyhoros Agora”. Recent live reviews from the Wreck Athens Festival were exceptional and, as a result, more and more fans are eager to see the Ivories (the boys fave nickname) on stage.
Mega sponsor and communication extraordinaire in this magical and musical ILLUSORY saga is Koskarian Group of Companies, the top-quality handmade jewellery creator!