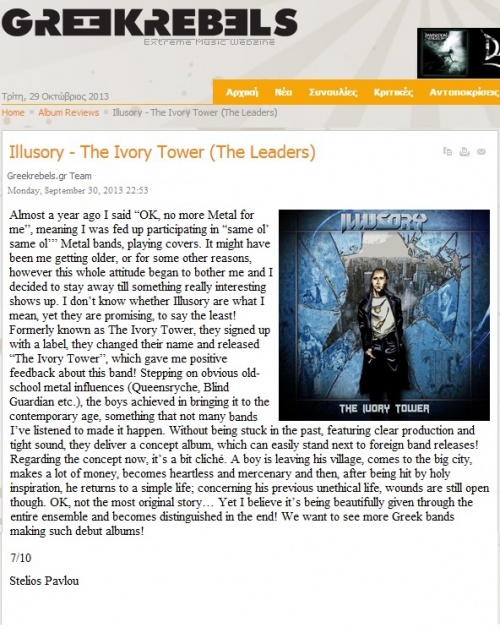 This is the review for “The Ivory Tower” from the Greek Rebels webzine translated in English!
7/10 points ranking!

Almost a year ago I said “OK, no more Metal for me”, meaning I was fed up participating in “same ol’ same ol’” Metal bands, playing covers. It might have been me getting older, or for some other reasons, however this whole attitude began to bother me and I decided to stay away till something really interesting shows up. I don’t know whether ILLUSORY are what I mean, yet they are promising, to say the least! Formerly known as the IVORY TOWER, they signed up with a label, they changed their name and released “The Ivory Tower”, which gave me positive feedback about this band! Stepping on obvious old-school metal influences (Queensryche, Blind Guardian etc.), the boys achieved in bringing it to the contemporary age, something that not many bands I’ve listened to made it happen. Without being stuck in the past, featuring clear production and tight sound, they deliver a concept album, which can easily stand next to foreign band releases! Regarding the concept now, it’s a bit cliché. A boy is leaving his village, comes to the big city, makes a lot of money, becomes heartless and mercenary and then, after being hit by holy inspiration, he returns to a simple life; concerning his previous unethical life, wounds are still open though. OK, not the most original story… Yet I believe it’s being beautifully given through the entire ensemble and becomes distinguished in the end! We want to see more Greek bands making such debut albums!